DARE TO EXIST NO2: Joshua Byron on How "Trans Monogamist" is a Labour of Community


For the second instalment of our ongoing series of interviews called DARE TO EXIST, we connected with Joshua Byron to ask about their incredible web-series Trans Monogamist, the poetry community, representation in media, and much more. 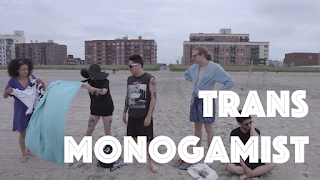 Justin: First of all, we wanted to thank you for your time. Both of us have been following your work for ages and are excited to get a chance to ask some questions. Do you mind sharing what your series Trans Monogamist  is about and what that term sort of means for folks to don't know?

Joshua: Trans Monogamist is a web-series about a non-binary dating columnist and their friends as they struggle and fail through dating, working, friendship, and trying their best. It follows River, primarily as they date a lot of soft boys and art boys and struggle to define themself among people who have different dating styles. River is a trans person who is a monogamist, their friends are either monogamous and cis or trans and polyamorous. River sort of struggles with understanding their desire for stability. 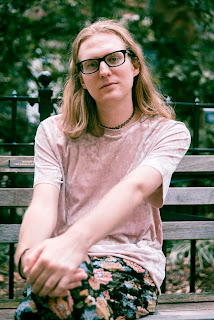 Joshua: Trans Monogamist was co-created by me and Alfredo Franco, who plays Harbor, and also starts Shelby Everett (Greta) and Alana Ruiz (Joseph). All four of us contributed to writing. I did a lot of prep work, location scouting, casting as did Alfredo. The series was directed by Russell Sheaffer of Artless Media and we had a very DIY ethic in making the project. Shelby would do make-up, my friend Ali Glembocki helped with styling and costumes as well as press, and they play Garden Weirdo in Episode 5. Myrrh Crow is an extra in Episode 6 and was our music coordinator along with Shelby. Hannah McSwiggen and Heather Sheaffer handled sound and scheduling as well. Russell was our editor and I was in the room during editing- partly because building the voice-overs actually came in after the filming. I think it was a labor out of the community we had built at the time, which is beautiful and also demonstrates the particular time we made it out of. I think the events reflect things we felt and that happened to us in maybe 2017-2018, but the voice overs reflect more ideas from 2018-2019. Which feels... wild in its own magical way. I'm curious about the way time effected its making. And of course, the way so many hands touched and shaped it. A lot of people from the poetry community were in it- Chariot Birthday Wish, Shy Watson, Mary Boo Anderson, and so on. And some local comedians- Griffin Leeds and Pete Valenti. 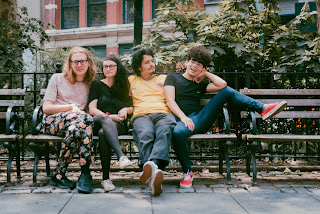 Justin: Do you think it's important for young people to see relationships that aren't represented in current popular media in order to rip stigma from love? I don't want to sound bias, but it is refreshing to watch people speak and act like folks I know, ya know?

Joshua: Seeing ourselves on screen can be so important. It's also very difficult to understand the ways representation can also fracture and leave us feeling upset. If something feels off or inarticulate or contrary to our own experience, I think media can enrage us. We feel that we aren't seen. Media and stories can be a powerful mirror, I know reading the queer stories that Ursula K Le Guin wrote this year felt so important, and I also know reading Ocean Vuong's novel was beautiful and heartbreaking and also very painful. Queer media has that edge I think, especially when it's about trauma. We want it and we want to push it away. I still can't read or see things that deal with conversion therapy, for instance. I think seeing more queer relationships and more kinds of queer relationships is vital to understanding how we can shift our own ways of being and stories are certainly powerful for creating and starting those shifts. But it's only ever a beginning. Others build out from there- people like Adrienne Maree Brown or Larry Mitchell or even in the poetry of Mary Oliver who I return to again and again. Sometimes nonfigurative or abstract work can be just as important into opening up what it means to be seen. I am wary of the ways the visual can or cannot stop stigma. I want it to. And certainly it can, historically we see that. But... I don't know. I'm not always convinced. 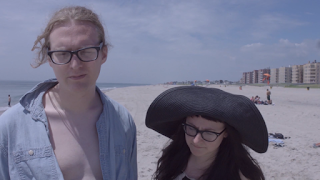 Justin: Would you mind telling us about your other work in film and writing? you're quite prolific, so to speak within poetry circles and such.

Joshua: 2019 for me felt much less prolific! But I know that's part of my internalized workaholicism and Virgo sun-placement. I like to say I'm a storyteller to have the room to play. I think my work has always sort of evolved with what I have access to. I made videos and video art in college and did some writing on art and dating that culminated in my first web-series Idle Cosmopolitan that was produced by Artless Media, whom I worked with on Trans Monogamist too. I wrote my own dating column for a while until that didn't feel as vital to me, I got into a relationship at the time. I wrote some essays too, most recently I had a zine come out at the beginning of 2019 called Sincere Hate. I sometimes think it feels like a messy collection of things, but it has always been a little messy to make art. I'm trying to let go of needing a narrative or selling point or main medium. My "CV" seems unfocused, I'm sure but I put it on my website just so I can understand where I've been and how that felt. I want to create more video and film work this year and see how it reacts in different environments, maybe more offline. Some day maybe a straight memoir and not just essays.

Justin: Does it seem like you're due to break out and reach more people? Your work is so solid that it feels just as worthy as a lot of other New York based art that is raking in mainstream acclaim in the last five years.

Joshua: I don't feel I can speak to that, though I certainly would like that!

Justin: Finally, what are you super into lately that doesn't get a lot of love? As much as you want, plug your friends or just say how much you love someone!


Joshua: I think the work that Adrienne Maree Brown is doing through emergent strategy and movement building and restorative justice is the way of the future. Joselia Hughes is one of the best writers and painters alive. Gabriel Orion McCulloch for their zines, songs, and their upcoming film Sam's Town! Glo Worm Press is doing amazing work, Chariot and NJ's work as individual poets too is incredible and important. Rose Harding, KT Pe Benito, and Milly Cai were three visual artists whose work was generative and beautiful this past year. I think often of the way NJ writes about milk and holiness. Cyrus Grace Dunham's memoir A Year Without a Name was one of the most potent things I read this year. Layli Long Solider's book Whereas was the best poetry collection I read last year. The film The Body Remembers What the World Broke Open was the best film I saw last year. There was so much great work about moving through trauma and thinking through what healing means- from Fleabag 2 to Back to Life to Russian Doll to fka twigs to the amazing and underrated One Day at a Time. I like many re-read Toni Morrison this year, watched Derek Jarman, and revisited David Wojnarowicz' work. That was the theme of the year for me I think: moving through trauma and pain and trying to reconceptualize what healing meant, to look at it like a prism. I kept coming back to Wild Geese by Mary Oliver. "You do not have to be good, you do not have walk on your knees for a hundred miles through the desert..." Joshua Byron is a non-binary storyteller based in New York. They have produced over twenty film works including, most recently, Trans Monogamist. They love Oprah, Carrie Bradshaw, pumpernickel bagels, and Ursula K Le Guin. Their writing has appeared in Bushwick Daily, Glo Worm Press, Awf Magazine, and the Body Is Not An Apology. Their films have screened at the Phluid Project, the Indianapolis LGBT Film Festival, Babycastles, Clouds and Other Louds Poetry Festival, and at various colleges. 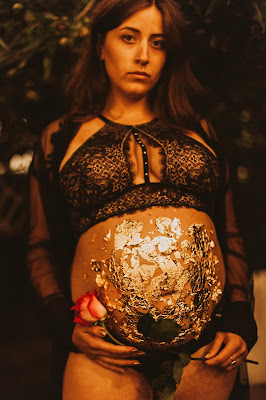 Dare to Exist NO3: Cassandra Narvaiz-Stott on the Collaborative Family & Her Path to Becoming a Doula

​(Photo by Tracie Barba, @tracieann on Instagram) For this week's interview, and our third entry in our on-going series of interviewing radical artists/citizens, we had the pleasure of speaking with doula, mother, writer, and all-around rad lady Cassandra Narvaiz-Stott about her path to being a doula, the stigma around the pregnant and postpartum body, the trials of raising a family, and much more.  (Please note this article contains brief mentions of obstetric trauma)

Justin: First of all, Cassandra, thanks for taking time out of your day to let us pick your brain. I've followed you for years on twitter, first through the poetry community, and now seeing you bud into this powerhouse of a woman - but we've never met, so it's kind of wild. Can you tell us a little bit about how becoming a doula developed?

Cassandra: Thank you so much for thinking of me and wanting to learn more about what I do. If I could aid in someone's growing interest in the ever-expanding world of … 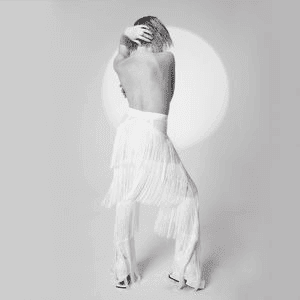 [2019's GREATEST HITS] Carly Rae Jepsen's "Dedicated" is a jawbreaker so sweet it breaks teeth, but the flavour lasts longer than the bubblegum

Music as a medium has reached a natural progression toward an era of pop stars sheathed post-modern reincarnations of the final two decades of the 20th century. Carly Rae Jepsen is no exception to this, but despite those influences living on the skin of her fourth album Dedicated, there are welcome feelings of wistfulness in a dry era to be young.

Some may argue that artists such as Jepsen exist as a marketed distraction, sucking money out of people and giving them a dopamine rush along the way. This is not a false claim, but it is important to keep in mind that pop music exists in several notions, and not just simply as 'art' or 'product'. These two concepts interact with each other to create a dialect that can be paired to economic factors, political influence, cultural pull, genre progression, and the sale of a physical commodity. Despite the fact that Carly Rae Jepsen is a product and brand, she is also an artis… 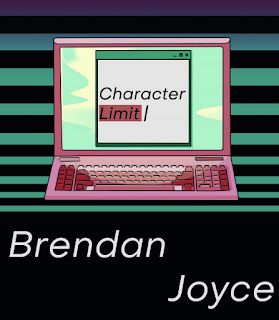 Brendan Joyce Character Limit 74 Pages
Even before the end of the 1970s, North American life was crashing into an abyss of profit motives, welfare slashing, environmental deregulation, diminishing labour power, and the monetization of waking life. The slackerdom of the 90s - which was a response to the business-driven 80s - is now replaced by anxiety disorders, an addiction epidemic, and a gig economy which cannot even provide for rental apartments. This is the shared reality for the majority, despite the rhetoric often spouted regarding how our lives couldn't possibly be bad due to the presence of smart phones, and how dare we criticize a capitalist economy when we are (forcibly) participating in it every day to survive?  These crushing economic issues are also social issues. Brendan Joyce gives a first-hand account of how unremarkable and anxious it can be to live in such inequality and instability, while the world around him burns and claims liberal values.